Thanks to salt, Givaudan reaches every part of the tongue

Taste is emotion, passion and experience, and you can talk about it for hours. The Swiss company Givaudan has thrived on it. The company makes and develops thousands of flavors that millions of people all around the world experience daily. And the best thing is that Givaudan’s flavor designers use salt from Suprasel® in many of those flavors.

Givaudan is the global market leader in flavors and fragrances. The company produces flavors for a vast range of products at various locations and is present in 86 countries around the world. This justifiably makes Givaudan, a taste-determining factor in everyone’s life. Ben Bischoff has been playing his part in this for more than 30 years. He currently works in the snacks division. “In my division, we mainly concentrate on flavors for salty snacks, chips, and nuts. So, if you’re at a party or sitting watching football on TV in the evening, there’s a big chance that you’ll be nibbling something with a flavor that we developed.” 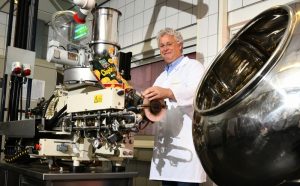 “However, without salt our products wouldn’t have a nice salty taste. In the past, salt was mainly used for its preservative properties, but now we use it chiefly to enhance the taste. You can come up with all kinds of refined flavors, but if you don’t use salt, the taste will be empty and bland. Nevertheless, there’s more to it than that. Besides the fact that salt enhances the flavor better, we also use it functionally, so that we can dose the flavoring properly. If we make thousand kilos of powder, for example, we only use six grams of the powder on every hundred grams of chips. But we still want to achieve a homogenous taste because you obviously don’t want the chip at the top of the bag to taste different from that at the bottom. So we measure the homogeneity of the salt in the flavor as this is relatively easy to measure. We use highly refined salt crystals which implies that our flavoring powder can be distributed very evenly.”

Chefs are occasionally flown in from around the world to start work on a theme for the production of new flavors. “We watch closely how they operate. You might see for instance that they use all kinds of ingredients for their stock. That stock then often forms the basis for numerous sauces. We’re then mainly interested in what happens in that stock. Givaudan adopts the same approach to respond to new trends as that of fast-food-restaurants. For example, we analyze Sriracha sauce and imitate it or we adopt typical flavors like those used in hip food trucks.”

All those new savory flavors are put together using around ten to twenty percent salt, namely specific grains of salt, chiefly supplied by Suprasel®. Bischoff: “That’s mainly connected with a combination of factors. Salt is obviously a very cost-effective ingredient in our flavors, but what definitely also plays a role is the constant quality and reliability of Suprasel®. In the past we sometimes saw salt grains of 500 microns passing through, but we prefer a mixture of grains of 30 and 250 microns, because the smaller the salt crystal is, the sooner it dissolves in your saliva and the sooner the flavor is experienced. This also gives the salt a prolonged flavor effect and makes it generally easier to dose. If you produce 30 thousand metric tons of flavorings annually in a factory, it’s good to know that they meet the stringent requirements that we set.”

The language of salt

Incidentally, at Givaudan, salt isn’t just a product. For them it’s so versatile and important that a whole language has been invented for it. Bischoff: “We use the language when we’re consulting a panel for testing. Because salt doesn’t just have an initial impact, it stimulates the taste buds too, and makes the flavor last longer. So it’s important for us to consider the effects if we want to replace the salt in certain flavorings with something else. Then you have to be able to describe precisely what that will do to the flavor profile and release. When we discuss tastes we’re not just talking about ordinary salt but also initial salt, salty-bitter, salty-sharp, umami (stock-like taste) and sweet-sour. We use these terms to indicate the area we’re working in. As we all know, our tongue can only detect five tastes; salt, sweet, sour, bitter and umami. However, besides these areas on the tongue, there are lots of other receptors that enable us to sense whether something is hot or cold or very pungent for example. We try to reach all those areas of the tongue with our flavors. And we do that, thanks to salt.”